Behind the Scenes: Passport Day 2022

The Stern International Committee’s premier event – Passport Day was held on April 14, 2022, after a pandemic-induced break of three years. The Passport Day is a celebration of the cultural diversity in our class with students and this year was no different! Featuring biryani and samosas from India and Pakistan, empanadas from Colombia, crêpes from France among many, MANY other delicacies from more than 25 countries, fabulous dance, song and comedic performances and attended by over 450 people, it was one of the biggest Stern events of the semester.

This year, the event was organized by the International Committee comprised of Jeetendra Khilnani, Anurup Gaurab, Joline Huntemann, Mike Wang, Nihar Patel, Leon Kee Pay and Jonas Putsch. I caught up with Jeetendra and Anurup to talk about the difficulty of pulling off such a massive event in the face of pandemic restrictions. 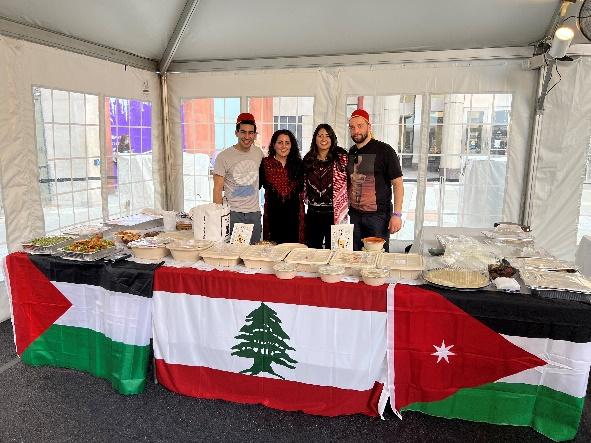 “First, we had a meeting to decide whether it was even worth having the event with all these restrictions,” Jeetendra tells me. “With all the money and the time involved. And then we decided, yes, we are going ahead with it no matter the restrictions.

“We were told we couldn’t bring food into campus. Then we were told if you want food on campus, it must be individually wrapped and served using tongs and there must be absolutely no contact, the people serving the food must be wearing gloves and hairnets. That’s when we decided on the food trucks. So, people can just go out, grab the boxes of food from the food trucks and eat wherever they want.”

The event was traditionally held with tables and people bringing in food so the idea of just bringing in food trucks was rather disappointing for the International Committee. But the rules changing in the first week of March presented an opportunity to bring Passport Day back in its original spirit!

“After the rules changed, we took another vote on whether we wanted to have the old format with the food and the tables or just continue with the food trucks,” Jeetendra says. “And we had the opportunity now, so of course we decided on the old format!”

Having spoken to OSE about setting up an event next semester, I knew getting the tent up cannot have been easy. 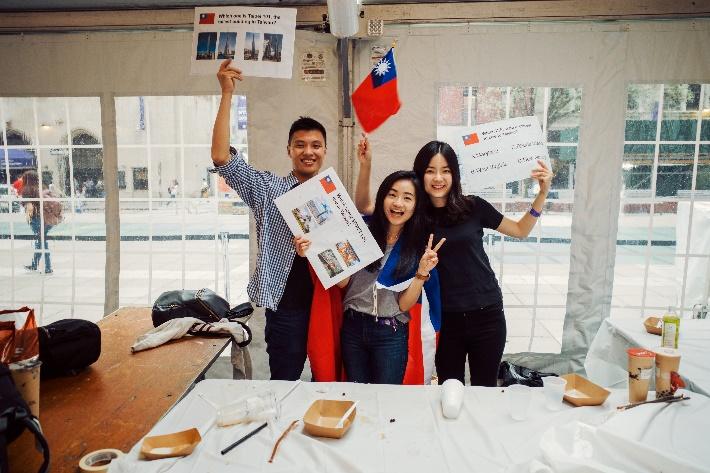 “It was a lot,” Jeetendra says. “We were liaising with OSE, and they mainly did this, but we had to get an architectural diagram for the tent and then get it to the city to get it approved and then the fire department, with layouts of where the individual tables were going to be placed. After that approval, we couldn’t add any more tables or change the layout. Someone from the fire department came in and inspected it at 4.30 pm on the day of. If we’d deviated from the plan, they would have shut us down!

“If we had more time, we could have planned a lot more,” he adds, wistfully.

The day of the event dawned sunny and spectacular, so they were caught by surprise by the weather forecast that promised rain, lightning and thunder. That’s when things started to go wrong.

“The last day was madness because of the back and forth with the rules and the weather,” Anurup recalls.

“On the day before, I was so excited because I was like, everything is shaping up, the event is going to happen,” Jeetendra says. “We are performing, SABAS is performing, it’s all looking great, the flags are in, everything’s fine. And then on the 14th, we are told there’s a chance of lightning and we can’t do the event in the tent. I was distraught.” 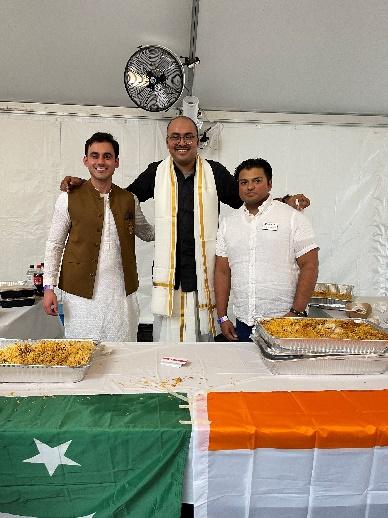 It transpires that a clause in the insurance for temporary constructions like the white tent set up for Passport Day did not cover lightning damage, throwing a wrench in the plans for having all the food tables and the performance inside the tent like in the before-times.

“I was in class when I got the email,” Anurup remembers. “I was dressed in Indian attire, and the professor asked me what was up, so I told him it was Passport Day. And he was so great, he announced it to the class and asked me if I wanted to say something about it. But literally three seconds before that, I got an email that we can’t do it outside. I was a bit shaken, so I said I don’t have anything to say, SGov will send you an email, it might be happening inside. But I couldn’t sit in class anymore, so I left fifteen minutes later and headed to the OSE chamber where these guys were.”

“I was in the grad lounge when I got the news,” Jeetendra says. “And we were distributing the tickets at the same time, not knowing at that moment whether the event was even happening. And everyone there could tell something was wrong, they could see it in our faces.”

“For two minutes, my mindset was like, forget it, let’s not do the event,” Jeetendra says, looking visibly frustrated. “We were going to have to do the event in three different rooms, the food tables split between Gardner on the first floor and KMC 5-50 on the fifth and then the performances in Paulson. It was going to be a mess, because I just knew people were not going to move between rooms.”

“We were all in the tent,” Anurup recalls. “Me and Mike and Jeetendra with Shannon and Jenna from OSE. And we were like, no, we are doing this, no matter what. So, we divied up the tasks.

“We were shifting things, taking the sound equipment back inside, the tables into the two rooms,” Anurup continues. “And then around 3.30pm, I get an email from Olivia asking me to come back to the tent. That’s when they told us we could have it in the tent after all!”

“I remember I went back to the grad lounge and announced it and everyone started cheering and clapping!” Jeetendra adds.

We didn’t have enough volunteers at that point, so we (the International Committee) were carrying the tables back from the two rooms ourselves. There were people standing around outside the tent so I just asked them – can you do this? Can you do that? But we couldn’t bring the sound back at that point. So, we just decided to do the event without the sound. I mean, it could become a logistical nightmare to get the food on the tables and get people into the tent. But,” he adds, “That unintentionally worked out great. Not having any music in the tent because people were actually having a conversation and talking about their cultures. I don’t think we’ll be having music in the tent next year either.” 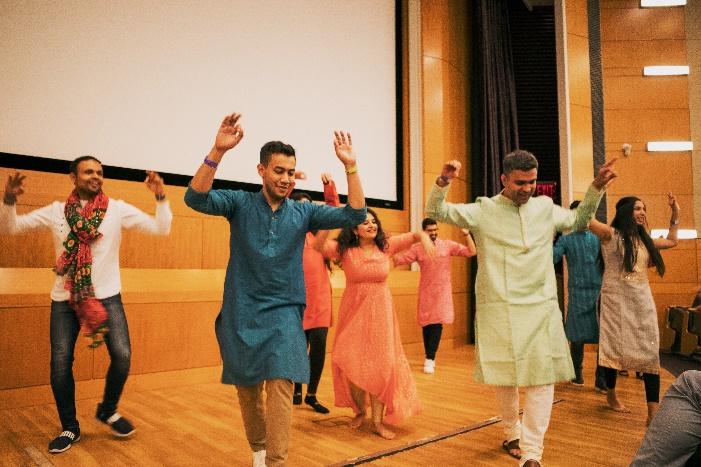 “We even had a problem with the flags,” Jeetendra mused. “We were supposed to hang them above each table. It was supposed to be flowing downwards. But we couldn’t because of the rules with the tent. So, we just had people put it on the tables instead. And if someone finds that disrespectful, of course, we wouldn’t put their flags on. Putting it on the walls of the tent was not an option, that was a $5,000 fine we couldn’t afford! And then someone wanted to put up a board with fun facts about their country, but we couldn’t let them do that either.”

“We even had some trouble with mis-labeling flags,” Anurup says, sheepishly. But luckily, the mistake was caught in time and corrected before the event started.

The SABAS dance performance was something I was quite looking forward to so that was my next question. 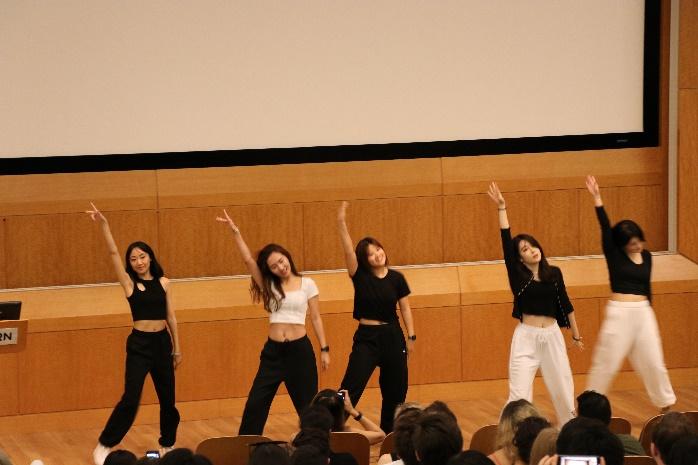 “I had a macro view over everything,” Jeetendra says. “I knew what ABS was doing. I knew what some of the other clubs were doing. Everyone was asking me, is there a Bollywood performance or not? And I was getting worried. In the past, we didn’t have K-Pop performances but there has always been a Bollywood performance and people were already asking me about it. And I was like, we can’t have Passport Day without a Bollywood performance. So, I was pushing for that. Finally, a week before the event, we created a group and then we started planning. But we didn’t really meet until the day before Passport Day! I think there was some hesitation because none of us had seen Passport Day before – not us or the second years. But maybe next year will be easier.”

“Yeah, before February 14, I didn’t even know about Passport Day,” Anurup agrees but Jeetendra laughs. “I wrote it in my essay. I wrote that one of my goals was coming to Stern and being actively involved in Passport Day!”

I wonder if they had any regrets.

“We didn’t have a United States stall!” Jeetendra says at once. “I think it’s a common misconception that Passport Day is for international students to bring their culture. So, I think next year, we can do something about that. Because in the past, I figured out during the planning process, we used to have stalls from the United States Military and the United States Navy, where it’s not necessarily a food exhibition, but a cultural exhibition. So, they would come in their uniforms and do like a trivia sort of thing, so you learn more about them. 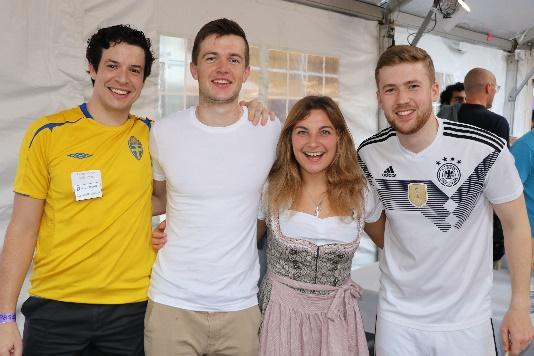 “But there was a lot of representation overall. People from the US, when they saw their countries or the countries their parents came from is not represented, they came forward and offered to set up tables for those countries. In terms of the food that people brought, the selection of food, it was totally crazy, I was very impressed. I think, in all the madness, the traditional attire part got a bit sidelined because that’s also a big part of Passport Day. But still, some of them did dress up in the spirit of the thing! I mean, it’s probably easier for us as Indians since our attire is not that complicated. But for other countries, I would not want to be running around in traditional stuff if it’s super complicated. But yeah, I really liked that Joline and Jonas dressed up in their German outfits. Guillaume was looking fantastic. Like a French sailor! I think next year, we should probably start telling people earlier about the traditional attire.”

I agree, having dressed in traditional attire myself! I wonder if they have anything on their wish list for next year’s Passport Day.

“So many millions! The parade, more countries, more stalls, more performances and hopefully, no more COVID! And,” Jeetendra adds. “A better backup plan in place in case the lightning decides to make another appearance!”

Published in Allyship, Culture, Events, Issue 8: May 2022, On Campus, Travel and Volume 58