Michael Modak-Truran is a J.D./ M.B.A. at Stern. Growing up, he was inspired by his parents who are both lawyers and is now pursuing specializations in intellectual property and technology law, media & entertainment, and business strategy. In addition to his school work, Michael is also taking on an ambitious project of directing the first and only authorized feature documentary about William Faulkner, a Nobel Prize winning author. Featuring Academy Award nominee Eric Roberts as Faulkner, the film is nearly finished after 5 years in the making. I had the opportunity to have a conversation with Michael where we spoke more about his background, interest in law and passion for storytelling.

So let’s start with the basics. Where are you from? What did you do before Stern?

I was born in Chicago, but I grew up in Jackson, Mississippi, which we’ll come back to because we’ll talk about working on a film about William Faulkner who’s, of course, from Mississippi.

I did my undergrad at the University of Chicago where I studied history and political science. I really loved that. For my thesis, I was reading about British wartime propaganda films and it was exciting because it was the beginning of documentary film in Britain. Then right out of undergrad, I worked for a consulting firm called Civic Consulting Alliance. While I was consulting, I got the opportunity to work with William Faulkner’s literary estate on this feature length documentary that I’m directing. The way this came about was that Sony Pictures and Woody Allen were being sued by the William Faulkner literary estate for the use of a quotation, which is in the title of the documentary, ”The past is never dead.” And in that litigation, my mom was representing Sony Pictures and Woody Allen, and they won on a fair use argument. But at the same time, they were looking for a lawyer to help with legal work for the estate. So they hired my mom to do some of their legal work. Turns out, the estate was interested in finding somebody to work on a documentary, somebody who was younger. I had worked on shorter documentaries, shorter narrative stuff, and this was, by far, the most ambitious thing that I was taking on. She was like, “You should talk to my son, he loves history, this is very much a historical project.” And so that’s how I got connected with them.

That’s fascinating, and this project is why you have a production company?

It’s a non-profit I manage called Coffee House Films. I formed that because for documentaries, a lot of the early stage funding is with grants, and a lot of those places want you to be a 501(c)(3). So I founded the organization to do that, to make all sorts of documentary films. I haven’t really figured out what the next project is. So I’m thinking about that, but at this point, I’m all in on finishing this Faulkner film, which we’re getting close to doing.

Well, let’s dive into that in a little bit. How did  you discover your interest in documentary filmmaking?

I started filmmaking when I was really young, maybe when I was in second or third grade. My mom is a lawyer and also a filmmaker, so I guess that sort of passed down to me in a way. I grew up working on some of her sets and her shoots, and did a lot of internships in high school and did some freelance work in college. At UChicago, the film program is very critical. So that’s partly why I didn’t pursue it in undergrad, because I was more interested in the making side rather than the critical analysis side.

And what specifically got you interested in Faulkner? Were you always a fan of his work?

Everyone in Mississippi grows up reading Faulkner, in addition to a lot of Southern literature. When I first read them in high school, I would say it was sort of too difficult. And I think it’s a shame that they’re foisted upon high school students, because they really require a lot of patience. But it was only when I returned to the novels with a little bit more experience that I really fell in love with his literature. I started learning about his life story, which is fascinating and full, filled with a lot of struggles. That was another moment that really connected me to the project.

So without spoiling too much, can you tell us what the documentary is focused on?

The title of the film is “Faulkner, The Past Is Never Dead.” It’s a feature length documentary. I don’t have the exact run time, it will probably be around 85 to 90 minutes when it’s finished. Right now, we’re very close to getting to picture lock. So when we have all the pieces in the right order we’ll finish adjusting the color and the sound. We ambitiously tried to cover all of his life and works in 85 minutes. The angle that we really take to look at Faulkner is the question I kept asking myself is like, what do we do with Faulkner? At the time, he was known for having depicted racial dynamics in Mississippi with a more nuanced lens than a lot of other white writers. So you have that, and you have him developing some black characters who are a little bit more thought out. At the same time, you have a writer who said some really problematic things, which we don’t shy away from in the movie. So what do we do with Faulkner now in 2022? I think it’s a big question that the film poses, especially at the end.

I find his journey especially interesting because he, like a lot of privileged, white children raised in the South, grew up with a black caretaker. She talks a lot about that relationship, and it inspired a lot of his characters, and we try to unpack what that meant. We have some experts who tried to speculate and give some context around what that relationship was like.

That’s an early anchor point in the film that we used to trace Faulkner’s life. I think the film tries to answer how a high school dropout from Mississippi who didn’t look like he had any prospects became a Nobel Prize winning author.

Interesting. Can you talk a little bit more about how the question you want to pose at the end is what to do with him now, through the lens of 2022?

We have a lot of really smart people on camera, who tried to help us walk through it. One of our academics said it’s certainly racist by today’s standards, but Faulkner also wrote some great books. So how much do we separate the works, which might live in a separate world, from the artists who lived in this other world? Obviously, he’s a white man who’s living in Mississippi for most of his life; he travels the world later on. I think it’s a really hard question. And I don’t have an answer. But I tried to curate people who I thought were really good at helping us think through that. And I think that’s a question we think a lot about: who can tell what story?

That’s a great question, something I think a lot of people can relate to today. And last question on Faulkner… What’s one of your favorite quotes of his?

There’s one from “Light in August,” which is another one of his major novels. “Memory believes before knowing remembers. Believes longer than recollects, longer than knowing even wonders.” I think it’s a similar theme to the “past is never dead,” but thinking about how we construct narrative and how we construct history and thinking about how our lives and our perspectives are shaped from things that happened in our past and also other people’s pasts.

So to circle back, you’re pursuing entertainment law. Why did you decide to add on the MBA trek?

When I was making the film, I really enjoyed both the legal and business aspects that I was seeing. whether that’s licensing, archival media, working on financing structures. Now, we’re pivoting more towards, I guess you would say, the marketing part of the film as we’re gearing up for festival submissions and trying to get the word out on the film. And I really enjoyed all of that process. So, I came to law school first and later added on the MBA because I thought it was a good opportunity to really get some business skills. It seemed like a really great opportunity to get that perspective.

I will be returning to work at Skadden, Arps, a law firm based in New York, this summer. But I’m hoping to also get some experience at a major media company during the year and next year, just given that my experience has all been very low budget compared to a company like HBO. So that’s a different world, a different perspective. And I’d love to get some sort of insight into that side of entertainment. 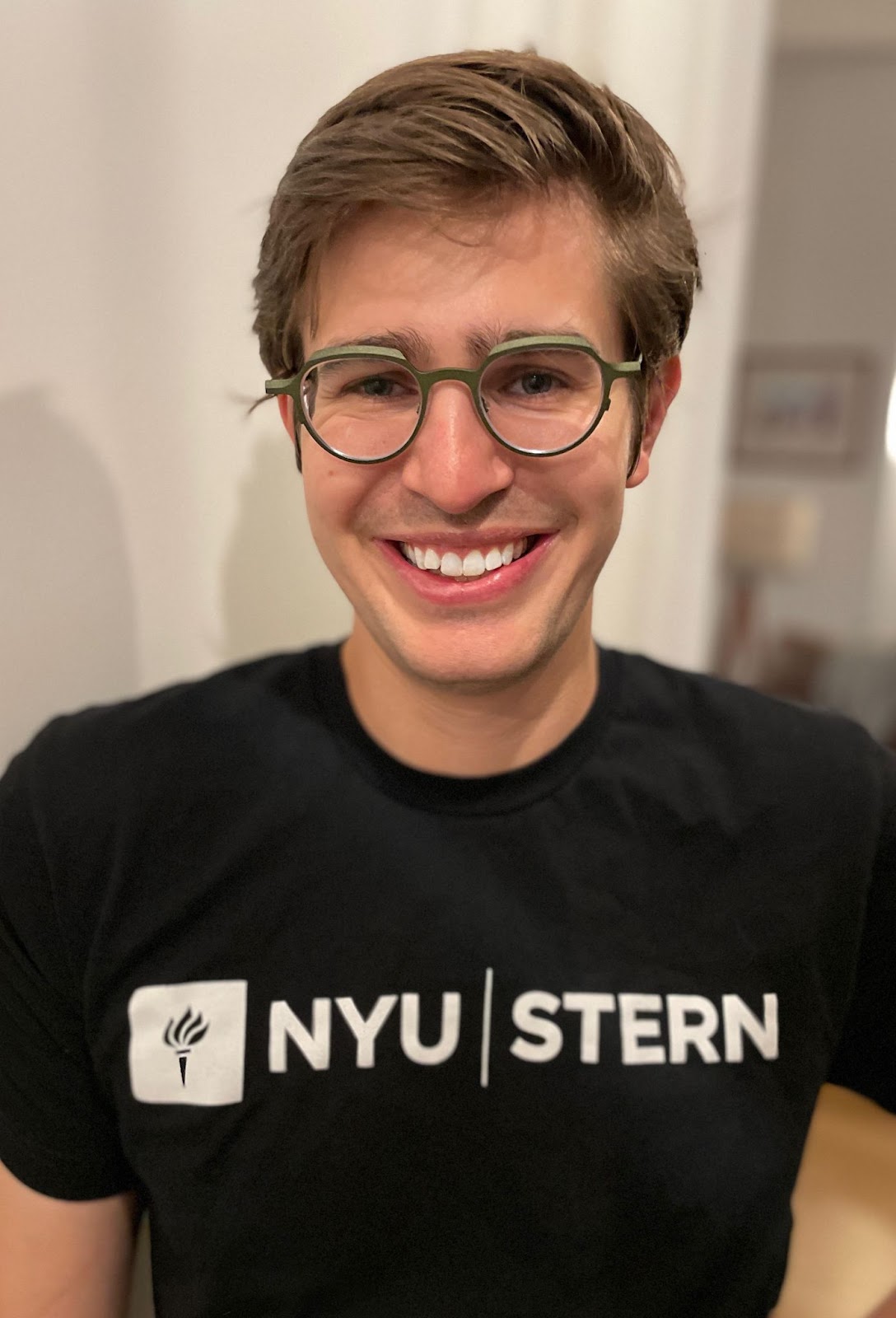 Got it. So you want to work in entertainment law and you still want to produce?

So I’m still figuring out what exactly that looks like. There’s a big divide between litigators and transactional lawyers, I definitely am on the transactional side of things, interested in intellectual property. Maybe further down the line I would want to produce or be more on the creative side? I don’t know. I’m certainly taking it one day at a time and trying to finish this film first.

Very fair. Thank you for chatting with me and can’t wait to see the documentary once it’s done! You can connect with Michael on LinkedIn @Michael Modak-Truran and check out the documentary at www.williamfaulknerfilm.com.

Published in Issue 5: February 2022, Stern Somebody, Stern Spotlight and Volume 58