Meet our December Stern Singles bachelor, Matt Givner, a full-time MBA 2 student from California. Matt traveled a unique path before Stern that took him from teaching and living in China, to starting a digital marketing consulting firm in Denver, to working in the cannabis industry where he became Snoop Dogg’s close and personal friend. Okay, maybe not close, or personal, but he did work with Snoop which in itself is a rarity. Keep reading to learn more about our bachelor this month! If you would like to nominate a classmate for future features of the Stern Spotlight, please email the Oppy staff at Oppy@stern.nyu.edu.

This interview has been edited for length and clarity.

Let’s start with the basics – what’s your background and what did you do before Stern?

Sure. I grew up in L.A. and I went to school at Wesleyan University in Connecticut, just north of here a couple of hours. I was an International Relations major in college and my goal was to be a diplomat and work at the State Department. After I graduated, I got into a program called Princeton in Asia, which is a program through Princeton University where recent college grads are sent to Asia to teach English. So I joined this program, and went to China. I was an English teacher for the first couple of years and then in my third year I worked in the PR department at Lenovo in their Beijing offices. The whole experience was amazing, but China ended up changing the visa policy in my third year so I no longer qualified for my job moving forward. I had to come back to the states.

My original plan was to come back, get a year of work experience in the U.S. and then go back to China. That didn’t quite work out. In the interim, I took and failed the State Department exam twice, so I figured that wasn’t going to happen either. So I ended up moving to Denver, Colorado, because one of my college friends was there and invited me to start a digital marketing consulting firm with him. He and I did that for about 18 months or so, working with small businesses and nonprofits on all sorts of digital media solutions. My friend ended up leaving to do his own thing, so I started to run the business myself. I decided to partner up with a PR firm called Agency 33 in Denver. At one point, we had a meeting with a potential client in the cannabis industry. Long story short, after that meeting, the folks from the Canvas Agency with the cannabis company really liked me so they offered me a job to come on as their marketing manager and made me an offer I couldn’t refuse. So I spent the next five years with them. I was their marketing manager, and then their director of marketing. It was lots of fun. Obviously, the cannabis industry is exciting and challenging in lots of ways, and the highlight was getting to hang out with Snoop Dogg several times.

Wait, what?! Snoop Dogg?! Did you just sneak that in there? I have like a million questions, but keep going.

I decided I wanted to get my MBA at Stern because I hadn’t lived in New York before and I felt like everyone should do that at least once in their life. I recruited for management consulting roles and interned this past summer at EY Parthenon. I’ll be going back there next year – very excited about it.

So you took a real turn from wanting to work for the State Department to the cannabis industry. I’m not letting that Snoop Dogg thing sneak by. Please explain more and how is Snoop in real life?

When I joined the company, it was called Live Well. The first six months that I was there was spent planning the launch party for Snoop Dogg’s brand of cannabis, which we were the sole producers of. We were going to sell it in our stores and wholesale it to other companies. So I came in as we were planning this launch, and a month before the launch happened my director of marketing left the company. I was promoted. And the first thing I asked was, “Does this mean I get to go to the Snoop Dogg party?” So that was the first time I met him. The second time I met him we flew to L.A. to give an update on how things were going. We were sitting at a big conference room table with his people on one side and my people on the other side. I sat right next to Snoop. He’s a really smart guy and, yes, he was smoking a joint the entire meeting. However, he was still asking really incisive questions and you could tell he had a mind for business. You don’t get to be Snoop Dogg without being smart. So it was really cool just getting to interact with him and his team in a business setting. Then, he came back to Denver several months later and did a private show for the owners and top salespeople for the dispensaries that carried his brand. It was definitely one of the highlights of getting to work in the cannabis industry. 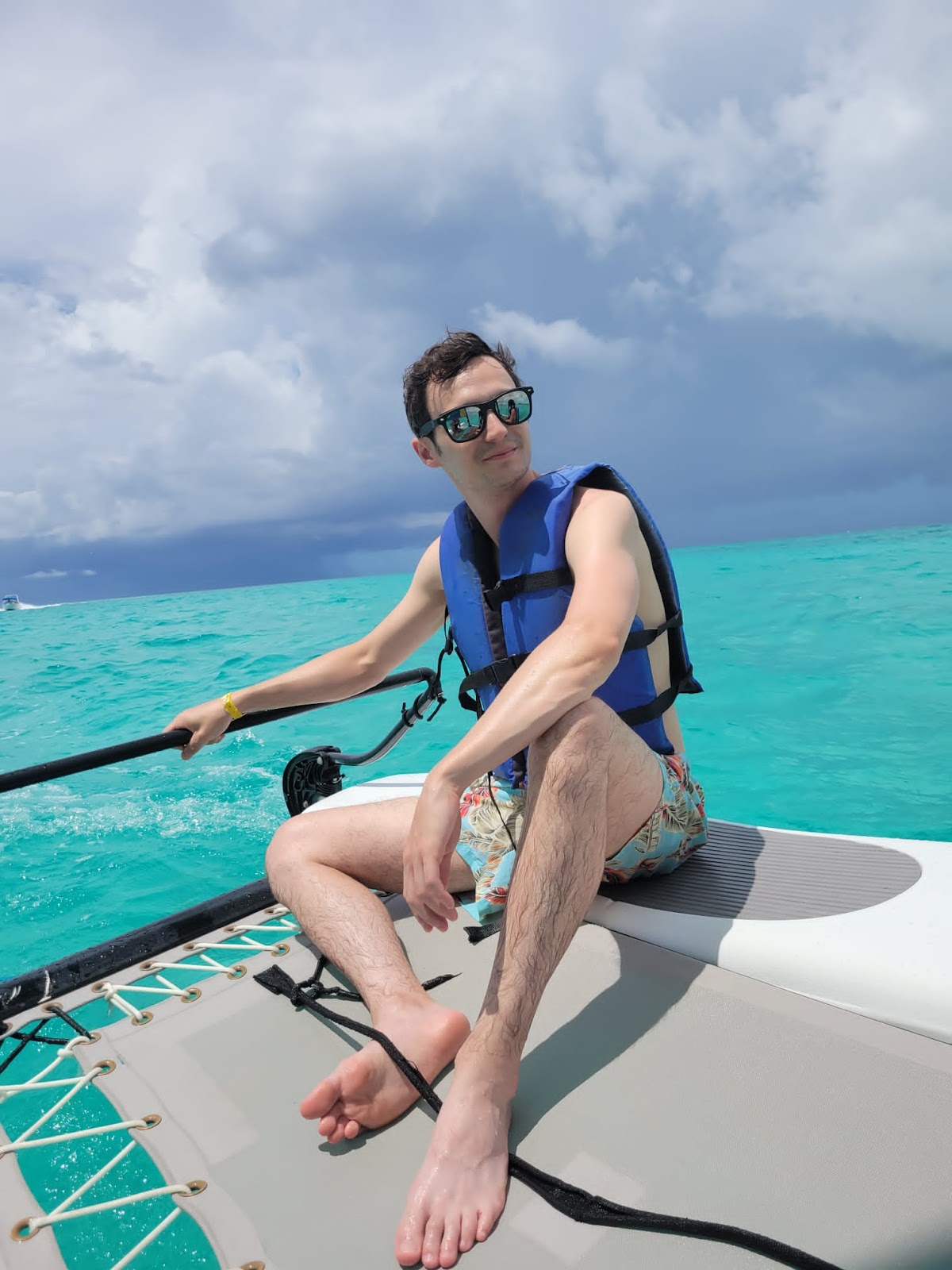 That sounds amazing. You should put that on your resume. Okay, so what do you think makes you who you are and what’s important to you?

Probably curiosity. I like to learn. My favorite thing to do is to learn something new. The way that’s manifested the most has been through travel. I’ve been very fortunate to have gotten to travel as much as I have. When I was younger, my parents and I went on little trips and I went to Europe with them, which is great because Europe is expensive. And then, obviously, I lived in China for three years and I would travel every chance that I got. I enjoy learning about new cultures and meeting new people. Not only because when you travel, you get to learn about other people, but I think when you travel you get to learn a lot yourself as well, like the things that you maybe take for granted from home. That’s when you really get to focus on yourself. As for what’s important to me, I’d probably say family. I would be nothing without my parents and my sister. They’re the ones that instilled my curiosity and it helped me travel. They’re my rocks. 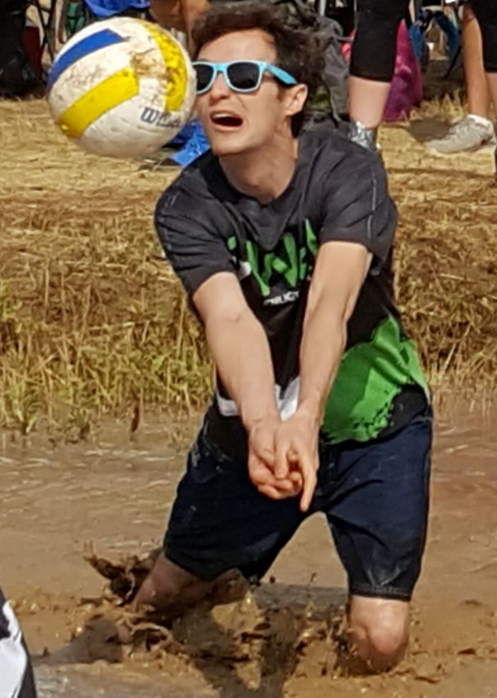 So what else do you like to do in your free time other than traveling? What are your hobbies?

When I was in Denver, I would go rock climbing once a week. It’s my favorite outdoor activity because I can do it indoors, too. I played volleyball when I was in high school and I still like to do it recreationally, just for fun. Not that I’m great at it, but I was pretty good back in the day. I also like to read. I’m a big sci-fi nerd. Dune came out recently; it was the book that turned me on to science fiction. When I was nine my dad gave it to me. It’s a monster book but I tore through it. It opened my mind. I loved it. So, I’m also a big fan of the movie. I think there are 12 books in the series and I’ve read every single one of them.

Oh my god, you’re a true fan. So, to the real point of this interview, who is the right person for you? What characteristics do you look for in a partner?

In general, curiosity, sense of humor and sense of adventure. Those would be my top three. I like someone who is just as curious as me. I like just walking into a museum and hanging out there for a little while, seeing a random exhibit and just enjoying it. I lived in DC over the summer when I was in college. I interned with a congressman. My favorite part of DC is that all the museums are free. Every weekend I pick one and spend the day there. So finding someone that will nerd out with me on things like that is a big deal. Obviously, a sense of humor. I come from a very sarcastic Jewish family so I need someone who will be able to keep up. For a sense of adventure, I want someone that’s willing to travel with me and has a ‘why not’ kind of personality. Someone to just say, “Yeah, let’s do it. Why not?” Beyond that, I tend to like women who are strong and independent minded – someone who doesn’t need someone to complete them but to compliment them. That’s what I look for.

And on the other side of that, what are some deal breakers?

Not a deal breaker, but it’s tough to date picky eaters. I’m an omnivore. I’ll eat anything and I’ll try anything once. I don’t like black licorice. That’s like the only thing I will not eat but otherwise, I’m down. Probably the deal breaker would be how you treat waitstaff and how you treat other people in general – but if you’re rude to a waiter it’s not gonna work out.. It’s a really tough job. I’ve had to be client facing a few times and it’s not easy, so I have huge sympathy for people that do it and I have no tolerance for people that are just rude for no reason. So that’s a big deal breaker for me.

So there was this dish when I was in China. It’s a type of spicy chicken noodles. I would get that at least three times a week. I had my little noodle lady that I went to. It’s funny, I broke my toe once when I was in China. I walked around with a cane for a little while and, one day, I went to her to get my noodles. She asked what happened and I told her I broke my toe. She said spicy food is bad for your toe. I was like, ‘lady, come on.’ She was like such a mother to me. It was so adorable. I have not found that since I’ve moved back from China.

That’s a good one. What type of music do you like?

This is probably surprising looking at me, but I’m a big West Coast hip hop guy. I’ve always been into it. Chronic 2001 changed my life when I heard it for the first time – so ever since it’s been hip hop. These days, I listen to it mostly because I really appreciate lyricism. For me, my creative outlet is writing. I write in my spare time for fun and so I really appreciate people who have a way with words and can twist words in a song. People like Common, Black Thought and Mos Def. Some of these guys are real lyricists. That’s what I really like about hip hop these days.

If I had to pick a favorite movie, it would be Independence Day. It’s got everything you want. It’s got aliens, explosions, comedy, Will Smith, Jeff Goldblum – what more do you want in a movie than that? It’s perfect.

What about a TV show?

I’ve been on kind of a historical fiction binge recently. I just finished Medici, which was cool. The Last Kingdom on Netflix is also great. I think the best one of the genre would be Rome – it’s an old HBO show. Or Vikings – classic, great historical fiction.

If you want to hear about his Snoop stories or find out more about his adventures in Asia you can reach out to Matt via Instagram @Mattgivner.