Years ago, The Oppy and Stern Chats, Stern’s MBA student-run podcast, were one. The two organizations were considered a single club, but due to unforeseen circumstances, the pair drifted apart. Now, with new leadership and a pursuit initiated by The Oppy that walked the fine line between perseverance and stubbornness, we are excited to announce that The Oppy and Stern Chats are partners once again. As the two media platforms on campus, we plan on sharing resources, cross-promoting, and hosting events together as the new school year approaches.

Longtime podcast lover Jennifer Evensen, a full time MBA 1 student, has just been elected the new President of Stern Chats for the upcoming year. She grew up primarily in Maryland and was a marketing tech specialist for a luxury home builder before coming to Stern. Now, she’s specializing in entertainment, media, and technology hoping to pivot to technology product management. The Oppy had the chance to chat with Evensen to learn more about her and the organization she leads.

So what made you want to get involved with Stern Chats in the first place?

I think the Stern admissions team must have sent an episode of the Search podcast in an email to prospective students at one point. Leading up to actually submitting my application, I started listening to Stern Chats and really liked it – I’m a huge podcast fan in general, so that got me interested. It seemed like a cool way to learn more about how podcasts are made instead of just listening to podcasts passively. 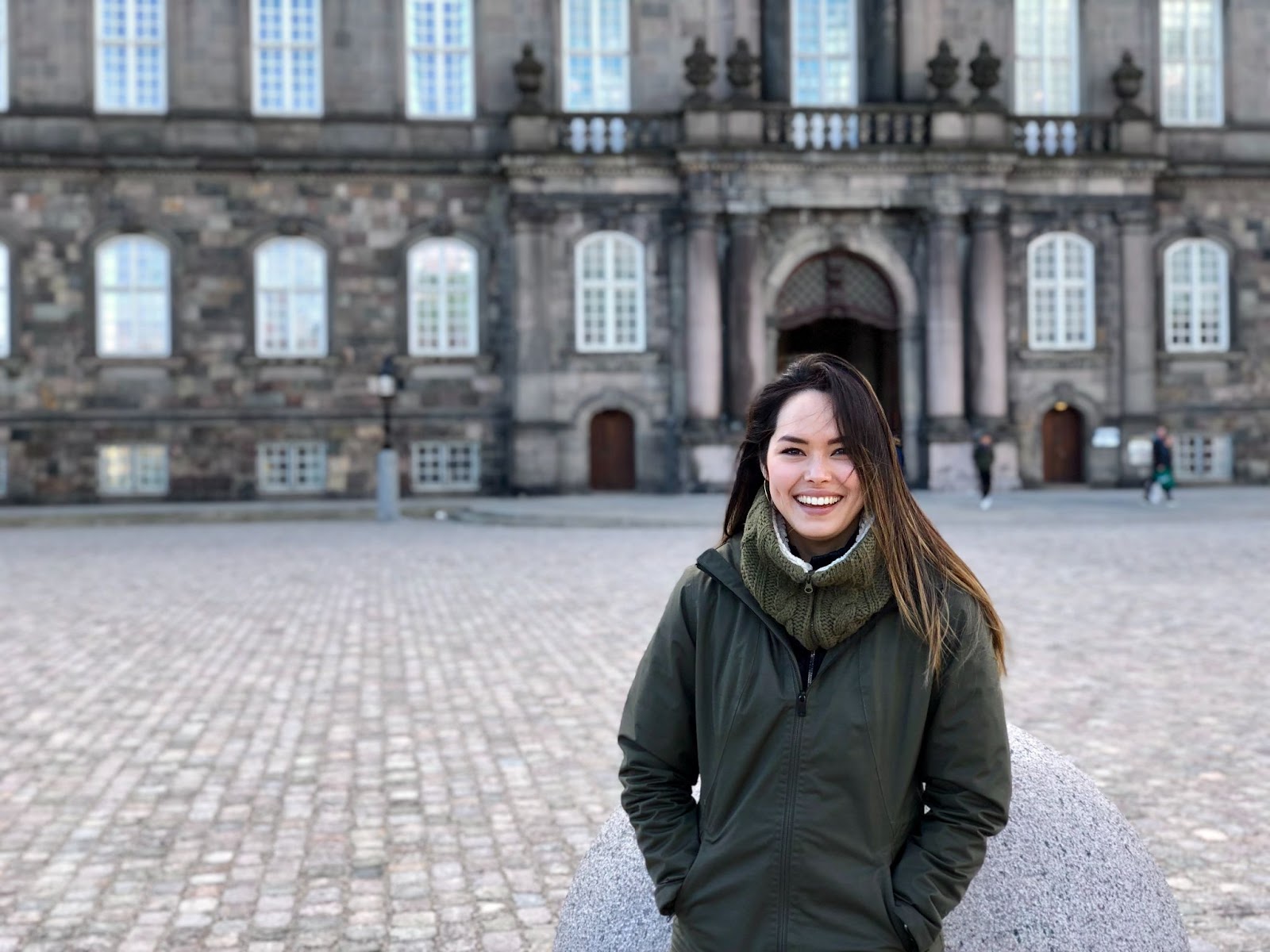 I figured you were a big podcast fan. So what are some of your favorites?

I have a lot. Let’s see. I really like Constitutional, it’s by the Washington Post. I like Uncivil by Gimlet. One of my favorites is Reply All by Gimlet.

What’s Reply All? I’ve never heard of that one.

Oh, it’s full of stories related to the internet, which is really broad, but they cover a huge range of topics, but they have a lot of good storytellers.

Oh interesting. By the way, congrats on being selected president! You told me about the rebranding effort and the new logo. Can you talk about that?

So it’s been a few years since the podcast launched, and we thought it would be nice to do a refresh to reflect a fresher and modern vibe. We as a team of existing board members got together and had a brainstorming session, and talked about how you wanted to see the Stern Chats brand evolve. In this cross functional meeting, we had people from the different verticals talk about what the Stern Chats brand means to them, what they wanted to see in the future, and we used that information to have the marketing team create a new logo. Specifically, Ariana Dial drew examples of what everybody wanted. And so she drew the new logo, and then we added some colors to it and put that out. Soon we’ll be using that information to create an official brand book for Stern Chats.

Let me back up. The new brand features a few new things. First, it has this modern typeface that says Stern Chats. And then we have the skyline that Ariana drew. It’s the New York City skyline and its reflection so that it looks like audio waves too. So it’s a blend of our New York City heritage and the audio storytelling that we have at Stern Chats. Those are the main components of it. But then beyond showcasing our audio storytelling in our New York City home, the new brand and its vibrant color palette really lets us express ourselves more, and I think the new brand has more depth to it. So there’s more opportunities for us to play around with graphics and colors and just really showcase our liveliness. In addition to a new logo, we have new music for the show. Daniel worked with fellow MBA student Jesse Han to create this, and it’s very fresh and fun, like the rest of the rebrand.

And what about your other media platforms?

We will be looking at everything. I think the marketing team this year has done a great job at engaging people on social media. And so this coming year, we’ll work to bring our website back to life and have that be a good source for anyone looking to find more information on the show.

Yeah, we kind of did the same rebranding efforts with The Oppy too this year.

Yeah, I think that Stern Chats and The Oppy are unique clubs, they operate differently than most other clubs at Stern. So it’d be really interesting to work together to uncover the stories around Stern and figure out how we can partner to hold events or do sponsorships and really bring our storytelling and our journalism efforts to the next level.

Speaking of storytelling. What was your favorite episode so far that you guys have done this year?

This is a bit biased, but I enjoyed the episode where Daniel hosted the three marketing AVPs—Ariana, Allison, and me. Listening to myself talk was a little cringey, but the experience of being on the show was really interesting. I never thought I would actually be on a podcast. It was nice talking with the other marketing folks and with Daniel about the show, and it was a fun experience overall. Beyond that one, I really liked the last episode—the host farewell. The six hosts of the season reflected on the year they’ve had. Now that I’m an actual student, I know who the hosts are, and I know all the effort they put into the show, so it was emotional to listen to the episode and realize that many of them are graduating and leaving this year. I know we’re going to do great things next year—we have amazing people on our board and I’m super excited to work with them. But it’s also bittersweet to think about how half of our current board is leaving. It’s been wonderful working with Marcin and Daniel and everybody else on the board this year. There are so many great people behind the scenes putting the show together.

Yeah, totally. And as a podcast fan, how was it actually being a guest on the podcast?

I don’t really know what I expected. I took advantage of the fact that you can edit things in post production, so I wouldn’t mess up and be like, Okay, let me try this again, and restate it. I’m not the best on the spot thinker or speaker. It’s still nerve wracking, but it helps that I was with people who I was comfortable with.

Well, if that makes you feel any better, you’re doing great now. So you’re already really involved as the leader now and you’re transitioning fully into your role in the fall. Can you tell us what’s next? What can we expect from certain charts, any exciting interviews you guys want to do?

I think summer will be a really great brainstorming period for us to figure out what we want and what we expect this coming year. But from a broader perspective, my main goals are to figure out what our processes should be moving forward, if there are any things that we can improve. How do we do that? And how do we document it so we can set up our future teams for success. And then the other part of that is that we’d love a lot more collaboration. I’d love to hear from other clubs, I’d love to hear from other parts of the school, whether it’s professors or the administration and to start a cycle of stories flowing our way for us to share with everybody else. And so it would be nice if we could open up Stern Chats to be a two-way street so people can come to us with stories.

If there’s one person you can have on the show, who would you want? Let’s do one Stern and one non-Stern.

Oh yes, Professor Said would be interesting. I had him for Firms and Markets.

Yeah. Same! It was the first time that I actually understood econ.

Right, he taught it really well. I didn’t feel stupid in that class which was a first. What about someone not from Stern?

I don’t know. But I would like to get another podcast host or producer on the show. And I’d love to pick their brains.

This past year’s board members, Marcin Skok (President), Daniel Yellin (Executive Producer), Yuting Mao (VP of Operations), and Abhinav Palash (VP of Marketing) did an incredible job transitioning Stern Chats to a virtual environment, so this coming year’s board members are equipped to keep the show moving forward, whether we’re online, hybrid, or in person next season.

Links to the show: