The Oppy staff is proud to continue our feature for the paper called “Stern Somebody,” where we tell the stories of our remarkable classmates and how they became the exceptional people they are today.

Half watching the umpteenth snowstorm of this winter unfold, mostly paying attention to my strategy intensive on Zoom, I heard the words “national figure skating coach” and thought, that’s not your everyday person getting an MBA.

Encountering Kevin Coppola in breakout rooms during some long Sunday sessions (Langone life), I wondered if he similarly felt like a fish out of water coming into business school from an entirely different industry. Kevin kindly took some time out of his day coaching and his birthday (!) to chat to The Oppy about his career as a figure skating coach and to discuss some surprising parallels between skating and business school.

Yes – I’m on my break. It’s also my birthday, which is why there are massive balloons crammed in the backseat.

Feeling extra special because you’re taking the time out of your special day to chat with us. Happy birthday! So how does one go about becoming a national figure skating coach?

I grew up in New Hampshire and spent a lot of time skating with family friends in public sessions at the rink, and pretty quickly began skating at a higher level. I got serious about skating at around 7 years old, and commuted to Boston starting at 13 to train. I switched to independent study for high school so I could dedicate to training. Then I booked a touring show, it’s kind of like a Cirque du Soleil on ice, and we toured all around Europe until I seriously injured my hip and came home. I continued skating and began competing in college, where I won the collegiate nationals in 2012 while studying at FIT.

I studied international trade and marketing in college, but I really just wanted to skate and become a coach. My skating coach told me she wouldn’t allow me to become a coach until I had gotten an education and a normal job, so I did just that – I worked in fashion and interned at Fendi, then worked at Ralph Rucci in production and supply chain, but a 9-5 just wasn’t for me…it was my first time away from the ice. I was actually coaching kids part-time, and when a mom of two boys saw me and asked if I could become their coach, I really thought I could do this full-time.

So you turned your passion into your day job. How’s that been going?

It’s been over 7 years, so I’d say pretty well. Those boys went on to be national competitors. Now I’m based in New Jersey, and coach 15-20 students with my coaching partner. I coach 7 days a week. We make dedicated training programs for them, many individualized or in groups for those in similar levels. It’s extremely rewarding to watch them win competitions and grow up, some that I’ve been coaching since they were 3 or 4 years old.

What does full-time skaters mean?

They’ll skate for 3 or more hours a day, plus off-ice strengthening and conditioning. They’ll attend independent school like I did, so they can dedicate to training.

This is incredible to hear considering I went ice skating for the second time in my life just last month.

What’s your proudest accomplishment in your career to date?

Like I was saying, some of these skaters have been my students since they took their first steps on the ice – I’ve worked with some for eight years. I watch them making nationals, landing triple jumps, and just watching them grow as an athlete and a person makes me immensely proud. There are so many ups and downs, and experiencing the trials and tribulations together and celebrating the good makes it worth it. As a Christmas gift, one of my students even designed a website for my coaching partner and me. 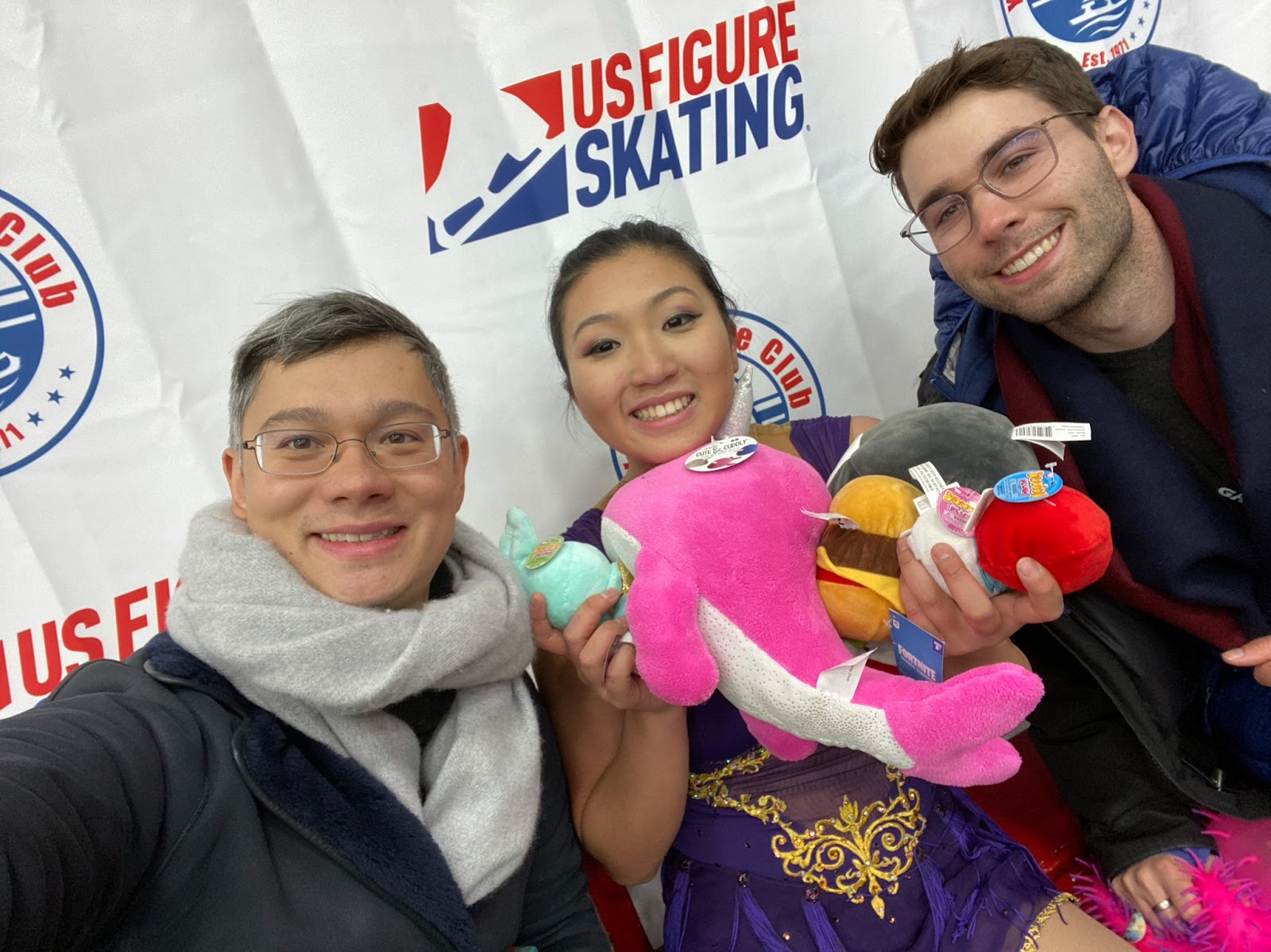 That’s how you know you’ve made such an impact on their lives! Everyone, check out his site – if you have young children wanting to try out ice skating, you can get them on the ice a lot sooner than 25 years old like someone I know (cough). Pk-skate.com

Listening to your story is so interesting I almost forgot you’re a fellow classmate getting your MBA. So here’s the classic elevator pitch question: what made you decide to pursue an MBA?

My mom is an accountant, so I’ve actually always planned to get a Masters degree. I then had a hip replacement last January and was off ice for a month and not coaching, so I figured what better time than to apply? And now I do homework and study in my car when I’m on breaks from the ice.

All jokes aside, my coaching partner and I want to create a brand – the website and our Instagram (@p-k-say) is a great start, and ultimately we’d like a bigger team to manage the students and business side of it all. Like any business, we need to keep track of each student, which is like organizing a company on its own, needing to strategize and plan, lead effectively, and communicate ideas. I’d also love to build enough of a brand to sponsor a nonprofit or scholarship dedicated to ice skating – it’s a huge family sacrifice of time and money to train at a competitive level. In Russia, ice skating is government sponsored, but since it’s not here, it requires hours on the ice and off the ice, and paying for training, ice time, and gear.

Give him a follow, folks! That’s incredible that you want to pay it forward and build something that makes competitive ice skating accessible for kids. What has surprised you since starting Stern?

It’s a little hard because I haven’t actually been on campus yet since I started Fall 2020. But I’ve loved meeting classmates – I was very nervous at first, knowing I didn’t come from a traditional business background or industry, and wondered if what I had to say would be applicable to anything in class. But everyone was extremely accepting and turns out, you definitely utilize a lot of skills as a coach to the concepts taught in LiO.

I mean, you’re literally a leader, so there you go. I think many people coming to business school from nontraditional sectors feel that way, but you’re just bringing a fresh and unique perspective to the table.

And since you’re so busy you’re sitting in your car to study and take interviews, how are you balancing school with your job?

By doing exactly this – I’ll sit in here doing accounting homework and readings. I try to be disciplined in both skating and part-time school, but also I’m accepting that sometimes certain things just won’t happen. I also set aside time where I have to think about neither work or school – my new kitten fills that time pretty well.

Balance is key – both on the ice and off. (Maybe that’s only funny if you can’t ice skate.)

Published in Issue 6: March 2021, Stern Somebody, Stern Spotlight and Volume 57

Phuong is a Langone student who started in fall 2020, with experience in program/project management in the nonprofit, behavioral health, and social impact sectors (all at NYU!). She enjoys all things music, from concerts to her carefully crafted Spotify playlists, exploring the city, and of course, writing. She grew up in the Midwest and went to undergrad in Atlanta, so everyone is confused as to how she ended up in NYC, but she'll be here a while.